Malawi – hanging by the Lake

Once again I was a little worried about crossing the border and entering Malawi because I heard that the officers there are apparently the most corrupt ones in all of Africa. I did get my visa in Germany beforehand which was a bit of a hassle since the forms are very strange and just confusing. But now I was worried that they would want me to present a letter of approval or a receipt for the visa which of course neither I had so I feared having to pay again and the Malawi visa was a rather expensive one.

But as usual the border crossing was a piece of cake. The officer was very happy with me already having a visa. He generously said “I give you 30 days!” although I only needed 6 days. When I left the counter I noticed a quite familiar survey terminal and rated his service as excellent. I would have never expected to run into HappyorNot in a country like Malawi. I just had to sneak that picture although you are really 😉

The plan for Malawi was basically just to relax a few days by the lake after all this driving. But I was also on a mission to give away 5 Kwacha to a kid. In Cape Town I had a cap driver who was very friendly to talk to and he questioned me about my travels. He told me that he’d never travel to a place he’d never been to before and therefore thought that I was very brave. I was wondering how he ended up in Cape Town though since he was from Malawi 😉 Anyways, he was very happy to hear that I was going to his home country, too. So he gave me a 5-Kwacha-coin – which is something like next to nothing – and asked me to buy candy for a kid when I am there. In Malawi the typical family has on average 12 kids and they are very happy to see tourists. So that should be easy to accomplish then! When walking somewhere it didn’t take long until I had 5 kids attached to each hand. They made pretty clear right away what they were after so the experience was spoilt a little. I tried to buy something for the 5 Kwacha at a roadside stand for a kid but even a piece of bubblegum was 15 Kwacha so I just gave the coin away.

Since Malawi is one of the poorest countries in Africa I had also stocked up on lollies and pencils in Zambia to give away to the kids. It is quite a stretch though between not wanting to encourage bagging from tourists and doing something nice for the kids. So I decided to give only to those who didn’t approach me with “Can you help me a sweet?!”. And of course I was able to find some kids at the lake who were very polite, spoke English well and helped me to find my way around. Of course I know that they pulled their muzungu-voodoo on me – bless them though!

The lake and its surrounding landscape were just beautiful and such a nice change from all the dried out vegetation and dust in southern Africa. If I didn’t know better, I would have guessed to be at the ocean. It is unbelievable how big the lake really is. Life seems to evolve around the lake for the locals. There are women doing their laundry, men coming back from fishing, kids bathing or playing football at the beach. 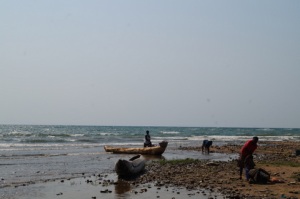 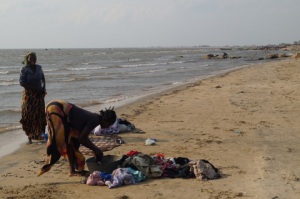 I took a stroll along the beach and was soon cornered by God knows how many kids. 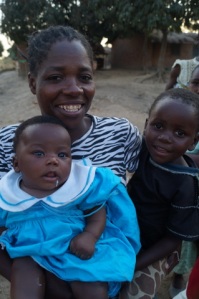 Two boys guided me along the way back to the road and we had to pass by some homes. We didn’t get far because nearly everyone came out to check me out and the two boys were busy fighting away the other kids but didn’t succeed. A woman came with her two kids and the older one wouldn’t let go of me until I was back at the campsite.
What I liked most about this experience was that no one wanted any money or things from me – only the guy who started to act like my guide and claimed to protect me. I was not sure though if he was drunk or full of Malawi Gold…

I moved up further north on the lake towards the border of Tanzania and stayed at a campsite that also serves as a home for kids from troubled families. It was founded by an American who volunteered as a teacher in Malawi over 10 years ago. So this was a chance to compare this project to MCP’s cause – and of course it was not a close race. 😉 I still have to say that I think it is a great concept that MCP doesn’t just give to people in need but asks for commitment, engagement and action in return. It seems like free stuff is not of value here and just ruins people.

Since I spend three nights at the northern part of the lake, I had a chance to visit the village and the local market. At the open market I tried to trade in some sweatshirts and jerseys for souvenirs. Although most people at the market asked if I had stuff to trade, when it came down to sealing the deal, they basically wanted the cloths plus the starting price. I thought it was pretty ridiculous what they were asking – 55 US$ for a little wooden jewelry box or 30 US$ for a small wooden elephant. And they made no effort to haggle with me. So I went back to the campsite with my stuff and empty handed. It amazes me how the poorer a country is the more expensive things are – and to be honest, I was the only tourist at the market so it didn’t seem like they will get many chances to sell their stuff. Visiting the vegetable market was fun though. People were very friendly and urged me to try their food. A lady offered me something that looked like bread. Since I am always curious to try the local food, I had a little piece. Big mistake! When I put it in my mouth she and other people around looked at me with big smiles on their faces and started giggling when I swallowed. I nearly threw up! It tasted like old smelly fish! I took a closer look at it and saw something that could have been insects. YACK!!! It was actually a paddy made from lake flies which you find in swarms of millions around here. That will teach me!

When walking around the village or by the lake I was not sure if people here are really off worse than in Mayana. They all had brick houses, goats and a vegetable garden and there were two pumps in the village where everyone could get water – actual drinking water – and there was electricity available. So it seemed to me like they were not doing too bad until I saw the primary school. First I thought it was a ruin. It just looked horrible and about to be torn down. I was wondering how the kids were supposed to learn anything there. Most classrooms had no benches and there were no teaching materials in the classrooms what so ever. It seemed more like a prison than a school. I later found out, that there was one teacher for 100 kids. So no wonder why all the kids here speak hardly any English – some are not even able to tell you their name.

Tomorrow I am off to Tanzania which is sadly the last country I am going to visit on my African adventure.

4 Responses to Malawi – hanging by the Lake