I have a Dream

What has been bothering me from the beginning in Mayana is how people treat their pets and animals. While people in western countries spoil their pets rotten and treat them like one of the family here sometimes an animal is just another mouth to feed and hardly anyone seems to have an emotional relationship to them. They are livestock and used for work and nothing more. Also I have witnessed kids mistreating birds, lizards, dogs or donkeys. They torture them, kick them, hit them, threw stones at them and kill them for no reason and maybe just out of boredom. I have told Joseph’s kids off several times and I also yelled at the neighbor’s boy if he’d threw a stone at Puzzle’s head – one of our donkeys – ever again I will through one at him. Being white helps a lot to make my point in this case. Also I have established the rule that no one is allowed to tie the front legs of the Meho donkeys together – it is forbidden by the government anyways. It is okay to release the donkeys from the crawl to let them graze but in order to make it easier to get them back in again, they tie the front legs together with palm leaves. The donkey has to hop around and since the leaves are pretty tight around his legs and sharp, the donkeys had horrible wounds which I treated. Unfortunately the other day Pito, Stocki and Mema were coming back home to get some water and food and when they came closer we saw Mema limping. We walked over to check on him and then I saw a big and deep flesh wound on his leg. Joseph explained to me that probably someone got him with a machete. I was wondering why someone was this cruel to a donkey. There are no more crops that they could have possibly destroyed and even if so it would have been better to catch the donkey and bring him back so we could have paid for the damage he might have done. But maybe some one just got him out of jealousy. Mema’s leg looked horrible and he was bleeding much. We decided to clean the wound, bandage and fixate it. This was tough beauseMema was in pain and didn’t want us to come close. John and Joseph were able to pin him to the ground but we had to tie his legs so he would not kick me when I was taking care of the wound. Good thing my Mom gave me many bandages and stuff which I lucky have only been using on others so far. When cleaning the cut I was able to see how bad it really was. The cut was about 3 cm deep and at least 4 cm wide and his strings and bone were cut, too. I did my very best on cleaning the wound, put a compress on and he got two small sticks to fixate the leg and then I wrapped the bandage around it. Actually he didn’t seem to be in horrible shape but I still questioned if it might be better to put him out of his misery since he would never be able to walk properly again not speaking of pulling a cart. We compromised on waiting for three days and make a decision then. Of course there is no vet we could have called to take of him properly. I still don’t get why people would do that to an animal just because they feel like it. Let’s hope Mema will make it! 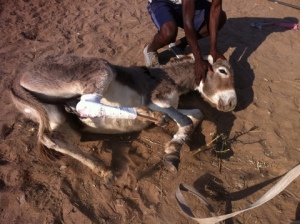 But it is not just the farm animals that get mistreated by some. On Sunday night I came home to find a little puppy sitting at the fire. It was very scared and soooo skinny. Joseph told me that he heard kids beating it and when I told Klaus about it, he said that it was at his house as well but his dogs chased it away. I asked Joseph if it was alright if I fed it and he replied it was ok – no matter his answer I would have fed it anyhow. The closest I had to dog food was tuna in a can. And the little guy just loved it. He still seemed to be hungry so I gave him a hard-boiled egg. I started making fire and he came over to warm up. I wanted to check if he was hurt but he wouldn’t let me touch him. I got the airplane pillow a mouse ate out of the trash and placed it close to the fire. Albert thought I was nuts and told me that the dog doesn’t need a pillow since he had no mind. I told him to wait and see and tadaaa the puppy got comfy on it. I had already decided to keep him and get him back to life when Gerhard told me that we were in luck that it is a male. If it would have been a female puppy they would have not liked it since she would only get pregnant which means even more mouths to feed. They just don’t have the money to get them sterilized. The little guy now got used to me and kept following me around. When I went into the bathroom he sat outside and started crying. It was just heart breaking. I was remembering how my whole family had been sleeping with Timo – our family dog – when he was little in the first few nights because he cried so badly. I was preparing myself to spend a night by the fire.

For a brief moment I was thinking about taking him inside but I had just gotten rid of yet another mouse which I believe was now really the last one.
He was pretty snug on his pillow and I decided to put more fire wood on so it would last until the morning. The whole night I was worried if he’d still be there tomorrow and I texted Klaus about my worries but he comforted me saying that he wouldn’t leave because I fed him.

When I got up the next morning he had left his pillow but was still by the fire and I restarted it so he could warm up. He already looked so much better and I made him porridge for breakfast. I went back to Joseph’s to let them know that I would go to Rundu to buy proper food for him. Joseph asked me if I had named him yet and I had actually thought about a few names. Since I wanted to give him a Rukuangali name, I had Joseph translate a bunch of words for me until I found a word that sounded nice and I was able to pronounce: NZODI. It means something like “dream for the future” and I thought it was just perfect.

In Rundu I got some puppy food for Nzodi, training bites, chewing bones and a toy.

I knew that they would think I was crazy spending money on the puppy but who cares. When I returned Nzodi was already so much better running around, playing, bothering Approach and exploring his new home. He was also happy to see me return. I fed him right away and he really enjoyed it. I am now also teaching and training him and the boys think it is just too funny how I tell him that he is a good boy. I think I am having a good influence on them because they now also say it to him or Approach and I have the feeling that they are starting to understand that they have to treat animals nicer. They are also admitting now that Nzodi is actually a nice and clever dog. Nzod
is already acquiring a nice belly and putting on weight. Also getting very naughty! I will spoil him rotten for the next two weeks and then hand him over to Joseph to take good care of him. 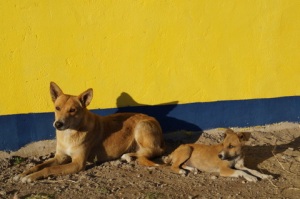 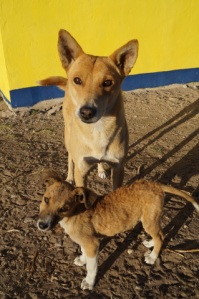 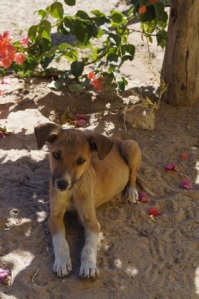 2 Responses to I have a Dream